Juneteenth: Why I'm celebrating and books that highlight its history

"Juneteenth (short for “June Nineteenth”) marks the day when federal troops arrived in Galveston, Texas in 1865 to take control of the state and ensure that all enslaved people be freed. The troops’ arrival came a full two and a half years after the signing of the Emancipation Proclamation. Juneteenth honors the end to slavery in the United States and is considered the longest-running African American holiday." —History Channel.com

If you google "Juneteenth meaning" you will get several links to stories about the events in Texas on June 19, 1865 where Logan Stroud gathered 150 slaves and read to them General Order Number 3 from U.S. Major General Gordon Granger that declared President Lincoln's 1863 Emancipation Proclamation was law in Texas. The Library of Congress tells the story best! (Check it out here) Freedom was cause for celebration but also some grief. The mixed emotions were due to the fact that slavery had been the only way of life most of the former slaves knew but now they had the opportunity to explore other lifestyles. To celebrate they danced, feasted, sang and prayed. The celebration became a tradition that is now recognized as a state holiday in 48 states and there is a push to make it a national holiday by several representatives in Congress. Celebrations of Juneteenth today include prayer and religious services, speeches, educational events, family gatherings and picnics, parades, or festivals with music, food, and dancing. So in 2021 for the first time in my life, I will celebrate this event on Juneteenth!

Growing up, Juneteenth was something I heard about but it was never really explained. Due to all the recent happenings in the United States such as the COVID-19 pandemic and social unrest during 2020, today I fully understand Juneteenth's meaning and purpose…celebrating freedom. While discussing legislation for a national holiday, Texas Congresswoman Sheila Jackson Lee says it better than I could. “Juneteenth legislation is a call for freedom, but it also reinforces the history of African Americans. We’ve fought for this country. We’ve made great strides, but we’re still the victims of sharp disparities. Our neighborhoods reflect that. We’ve been denied the same opportunities for housing, access to healthcare and, in 2020, [during] COVID-19, all of the glaring disparities are shown. Because of that, I think this is a time that we may find people who are desirous to understand the history not necessarily only of African Americans, but the history of America.” (Time.com "Activists Are Pushing to Make Juneteenth a National Holiday. Here’s the History Behind Their Fight" by Olivia B. Waxman June 17, 2020).

While our library has several books that highlight Juneteenth celebration, these five books give some background into why the day is so important. 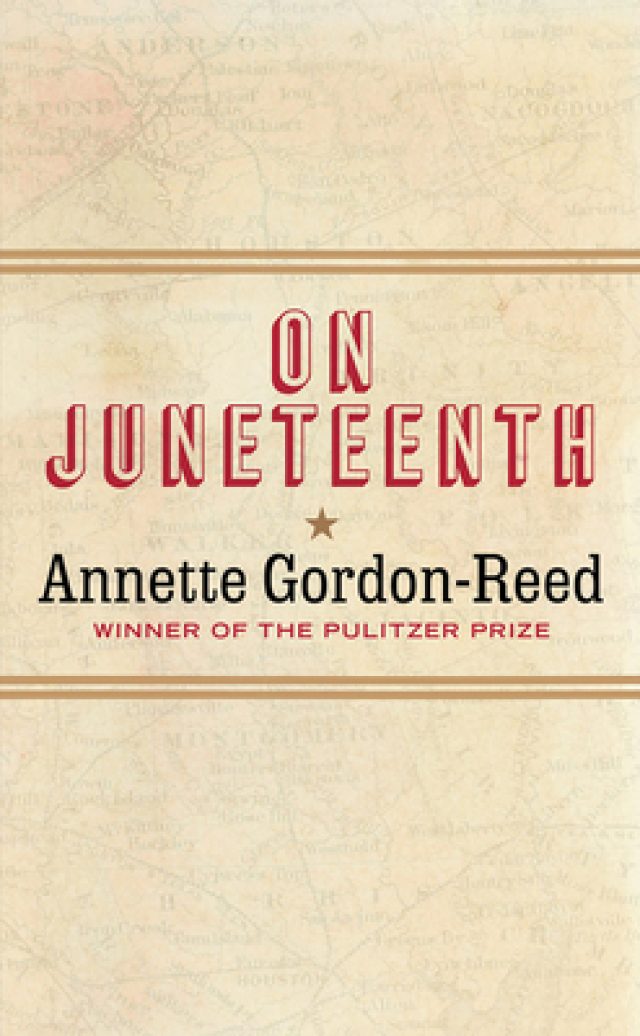 On Juneteenth is an insightful discussion of Texas history and culture mixed with African-American history and culture. From this book you can get an understanding of the atmosphere in Texas for Blacks during and after the proclamation was given.

Description from the publisher:
Weaving together American history, dramatic family chronicle, and searing episodes of memoir, Annette Gordon-Reed’s On Juneteenth provides a historian’s view of the country’s long road to Juneteenth, recounting both its origins in Texas and the enormous hardships that African-Americans have endured in the century since, from Reconstruction through Jim Crow and beyond. All too aware of the stories of cowboys, ranchers, and oilmen that have long dominated the lore of the Lone Star State, Gordon-Reed—herself a Texas native and the descendant of enslaved people brought to Texas as early as the 1820s—forges a new and profoundly truthful narrative of her home state, with implications for us all. 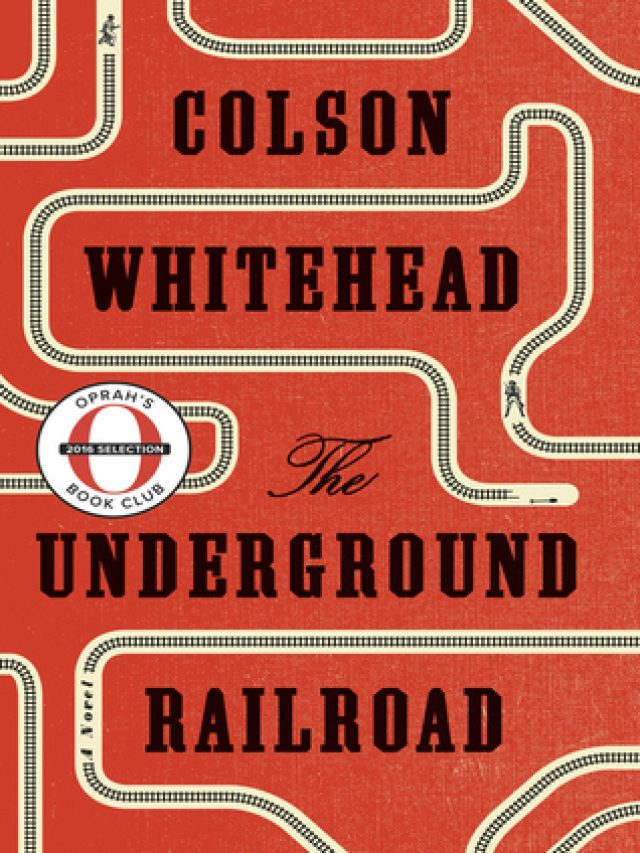 The Underground Railroad: a novel

The Underground Railroad is a good novel to explore or imagine what the journey may have been like for slaves seeking to obtain their freedom.

Description from the publisher:
Cora is a slave on a cotton plantation in Georgia. Life is hell for all the slaves, but especially bad for Cora; an outcast even among her fellow Africans, she is coming into womanhood—where even greater pain awaits. When Caesar, a recent arrival from Virginia, tells her about the Underground Railroad, they decide to take a terrifying risk and escape. Matters do not go as planned—Cora kills a young white boy who tries to capture her. Though they manage to find a station and head north, they are being hunted.
In Whitehead’s ingenious conception, the Underground Railroad is no mere metaphor—engineers and conductors operate a secret network of tracks and tunnels beneath the Southern soil. Cora and Caesar’s first stop is South Carolina, in a city that initially seems like a haven. But the city’s placid surface masks an insidious scheme designed for its black denizens. And even worse: Ridgeway, the relentless slave catcher, is close on their heels. Forced to flee again, Cora embarks on a harrowing flight, state by state, seeking true freedom. 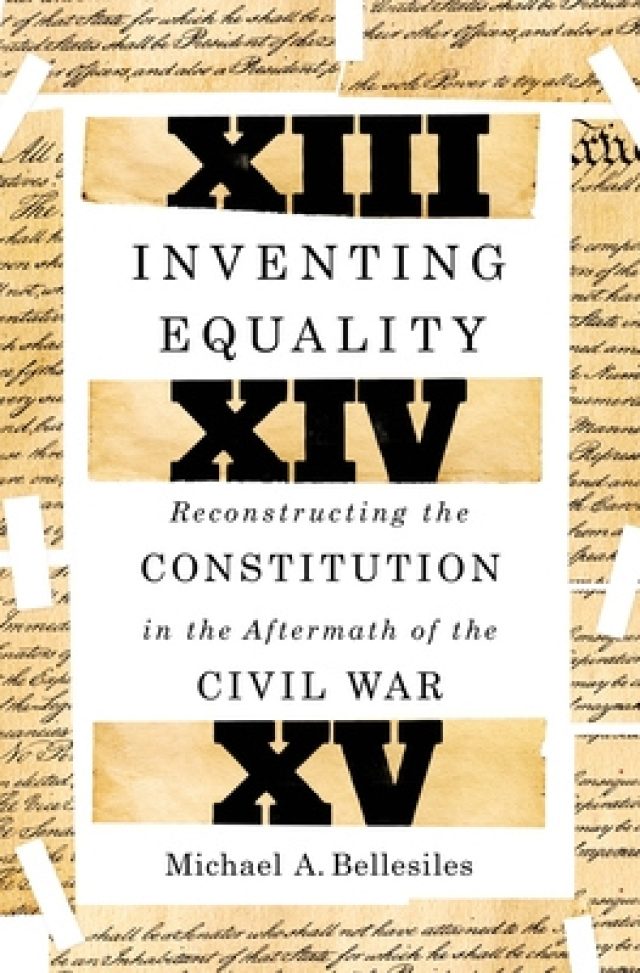 Inventing Equality : Reconstructing the Constitution in the Aftermath of the Civil War

by Michael A. Bellesiles

Inventing Equality is a scholarly look at what some may call African-Americans' passage to citizenship in the U.S. Constitution.

Description from the publisher:
From the very beginning, American history can be seen as a battle to reconcile the large gap between America's stated ideals and the reality of its republic. Its struggle is not one of steady progress toward greater freedom and equality, but rather for every step forward there is a step taken in a different direction. In Inventing Equality, Michael Bellesiles traces the evolution of the battle for true equality--the stories of those fighting forward, to expand the working definition of what it means to be an American citizen--from the Revolution through the late nineteenth century. He identifies the systemic flaws in the Constitution, and explores through the role of the Supreme Court and three Constitutional amendments--the 13th, 14th, and 15th--the ways in which equality and inequality waxed and waned over the decades. 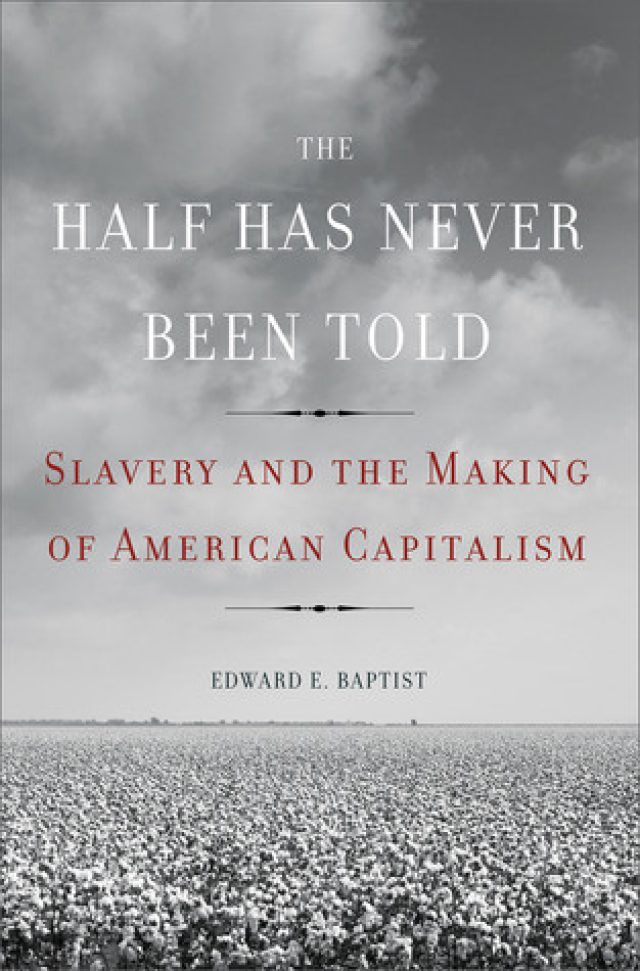 The Half Has Never Been Told: Slavery and the Making of American Capitalism

The Half Has Never Been Told: Slavery and the Making of American Capitalism gives insight and statistics into the development of slavery in the U.S. and a prominent fragment of the establishment of the economy that America still flourishes on.

Description from the publisher:
Americans tend to cast slavery as a pre-modern institution—the nation’s original sin, perhaps, but isolated in time and divorced from America’s later success. But to do so robs the millions who suffered in bondage of their full legacy.

As historian Edward Baptist reveals in The Half Has Never Been Told, the expansion of slavery in the first eight decades after American independence drove the evolution and modernization of the United States. In the span of a single lifetime, the South grew from a narrow coastal strip of worn-out tobacco plantations to a continental cotton empire, and the United States grew into a modern, industrial, and capitalist economy. Until the Civil War, Baptist explains, the most important American economic innovations were ways to make slavery ever more profitable. Through forced migration and torture, slave owners extracted continual increases in efficiency from enslaved African Americans. Thus the United States seized control of the world market for cotton, the key raw material of the Industrial Revolution, and became a wealthy nation with global influence. 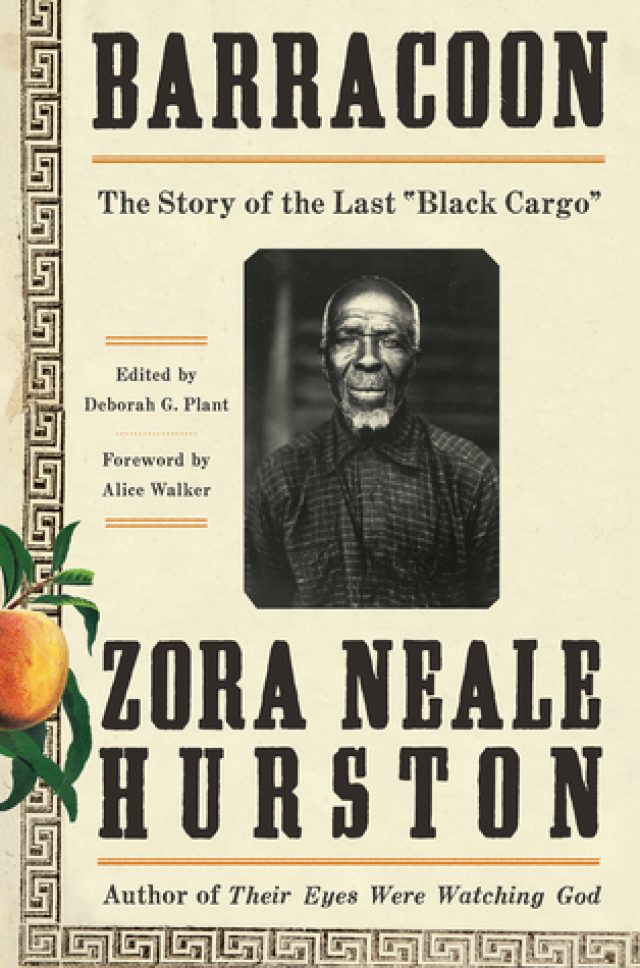 Barracoon: The Story of the Last "Black Cargo"

Barracoon supplies details of several interviews Hurston did with the last known African to be transported on the Atlantic slave trade that was illegal at the time and the community they created outside Mobile that is now known as Africatown.

Description from the publisher:
In 1927, Zora Neale Hurston went to Plateau, Alabama, just outside Mobile, to interview eighty-six-year-old Cudjo Lewis. Of the millions of men, women, and children transported from Africa to America as slaves, Cudjo was then the only person alive to tell the story of this integral part of the nation's history. Hurston was there to record Cudjo's firsthand account of the raid that led to his capture and bondage fifty years after the Atlantic slave trade was outlawed in the United States.
In 1931, Hurston returned to Plateau, the African-centric community three miles from Mobile founded by Cudjo and other former slaves from his ship. Spending more than three months there, she talked in depth with Cudjo about the details of his life. During those weeks, the young writer and the elderly formerly enslaved man ate peaches and watermelon that grew in the backyard and talked about Cudjo's past--memories from his childhood in Africa, the horrors of being captured and held in a barracoon for selection by American slavers, the harrowing experience of the Middle Passage packed with more than 100 other souls aboard the Clotilda, and the years he spent in slavery until the end of the Civil War. 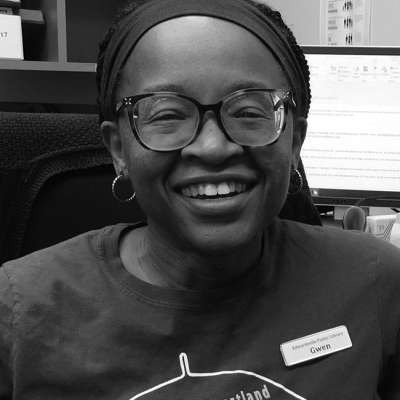 Gwen has been working in Technical Services at EPL since 2005. She enjoys reading Amish & Christian fiction, African-American non-fiction, and all things with her grandchildren.