Everyone has different tastes when it comes to books, but if you enjoy the Great British Bakeoff and like to indulge in a nice romance, these books might fill your particular quiche—I mean niche. Each of these books is cooking up a romance for competition judges, contestants, or otherwise set around a baking or cooking competition. Whether it’s falling in love while competing to bake the perfect dessert or cook the most incredible side dish, each of these books is sure to be a treat.
-Kaylee 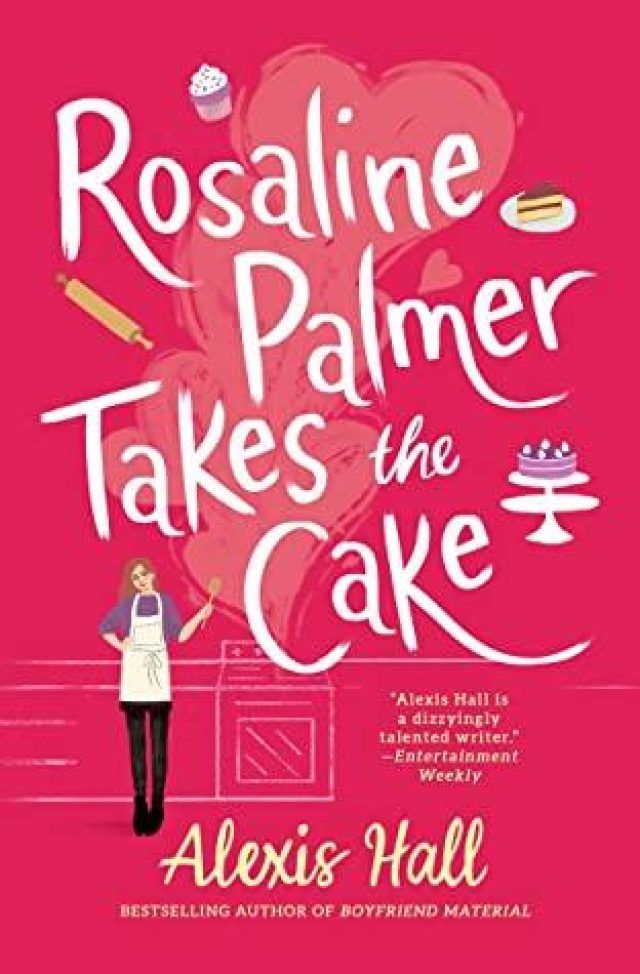 Rosaline Palmer has always lived by those rules—well, except for when she dropped out of college to raise her daughter, Amelie. Now, with a paycheck as useful as greaseproof paper and a house crumbling faster than biscuits in tea, she’s teetering on the edge of financial disaster. But where there’s a whisk there’s a way... and Rosaline has just landed a spot on the nation’s most beloved baking show.

Winning the prize money would give her daughter the life she deserves—and Rosaline is determined to stick to the instructions. However, more than collapsing trifles stand between Rosaline and sweet, sweet victory. Suave, well-educated, and parent-approved Alain Pope knows all the right moves to sweep her off her feet, but it’s shy electrician Harry Dobson who makes Rosaline question her long-held beliefs—about herself, her family, and her desires.

Rosaline fears falling for Harry is a guaranteed recipe for disaster. Yet as the competition—and the ovens—heat up, Rosaline starts to realize the most delicious bakes come from the heart. 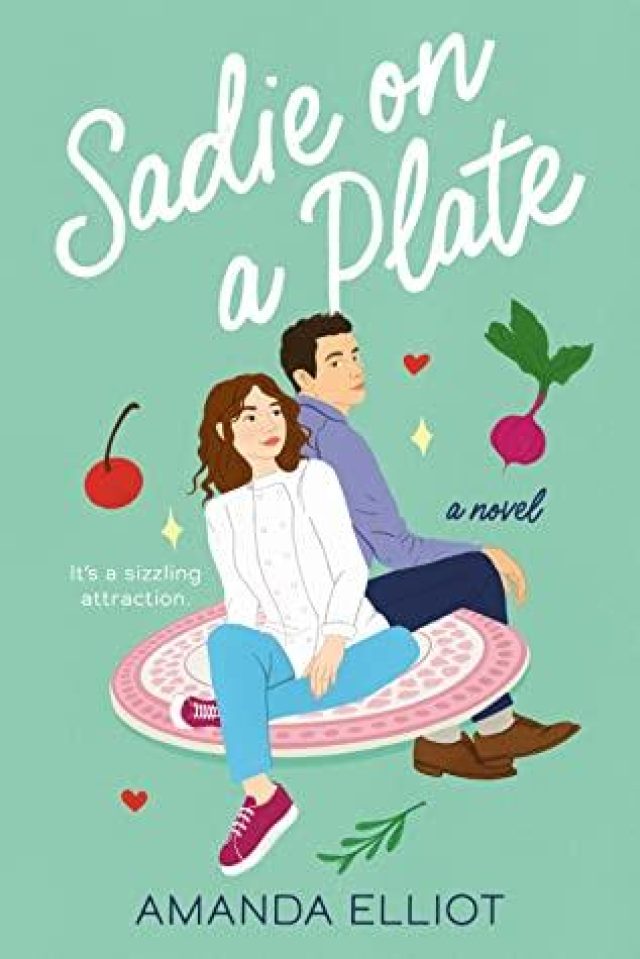 Sadie on a Plate

Sadie is a rising star in the trendy Seattle restaurant scene. Her dream is to create unique, modern, and mouthwatering takes on traditional Jewish recipes. But after a public breakup with her boss, a famous chef, she is sure her career is over--until she lands a coveted spot on the next season of her favorite TV show, Chef Supreme.

On the plane to New York, Sadie has sizzling chemistry with her seatmate, Luke, but tells him that she won't be able to contact him for the next six weeks. They prolong their night with a spontaneous, magical dinner before parting ways. Or so she thinks. When she turns up to set the next day, she makes a shocking discovery about who Luke is...

If Sadie wants to save her career by winning Chef Supreme, she's going to have to ignore the simmering heat between her and Luke. But how long can she do that before the pot boils over? 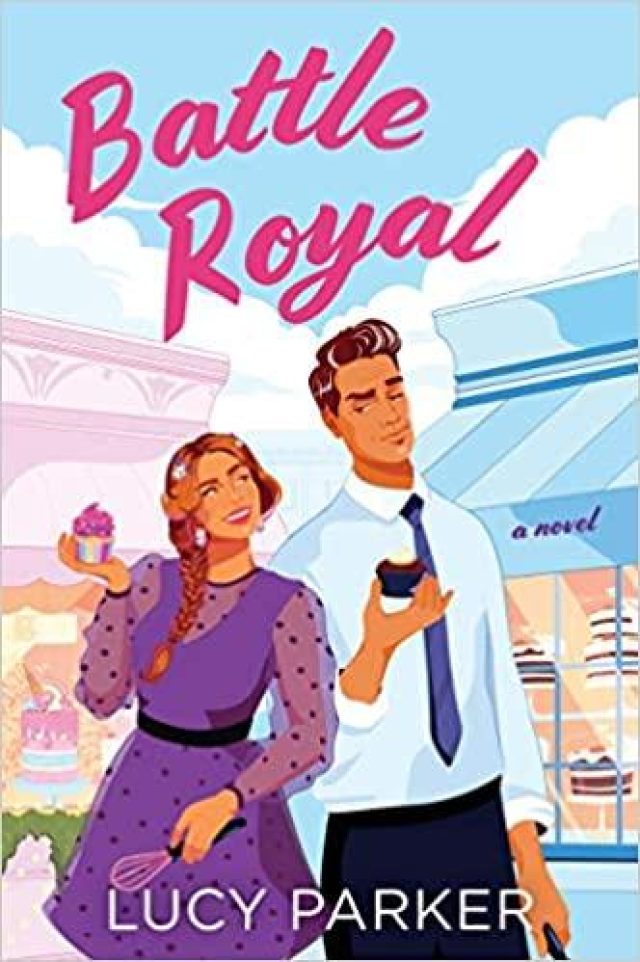 Four years ago, Sylvie Fairchild charmed the world as a contestant on the hit baking show, Operation Cake. Her ingenious, colorful creations captivated viewers and intrigued all but one of the judges, Dominic De Vere, the hottest pastry chef in London. When her glittery unicorn cake went spectacularly sideways, Dominic was quick to vote her off the show. Since then, Sylvie has managed to use her fame to help fulfill her dream of opening a bakery, Sugar Fair. The toast of Instagram, Sugar Fair has captured the attention of the Operation Cake producers…and a princess.

Dominic is His Majesty the King’s favorite baker, the go-to for sweet-toothed A-List celebrities, and a veritable British institution. He’s brilliant, talented, hard-working. And an icy, starchy grouch. Learning that the irksome Sylvie will be joining him on the Operation Cake judging panel is enough to make the famously dour baker even more grim. Her fantastical baking is only slightly more troublesome than the fact that he can’t stop thinking about her pink-streaked hair and irrepressible dimple.

When Dominic and Sylvie learn they will be fighting for the once in a lifetime opportunity to bake a cake for the upcoming wedding of Princess Rose, the flour begins to fly as they’re both determined to come out on top. The bride adores Sylvie’s quirky style. The palace wants Dominic’s classic perfection. In this royal battle, can there be room for two? 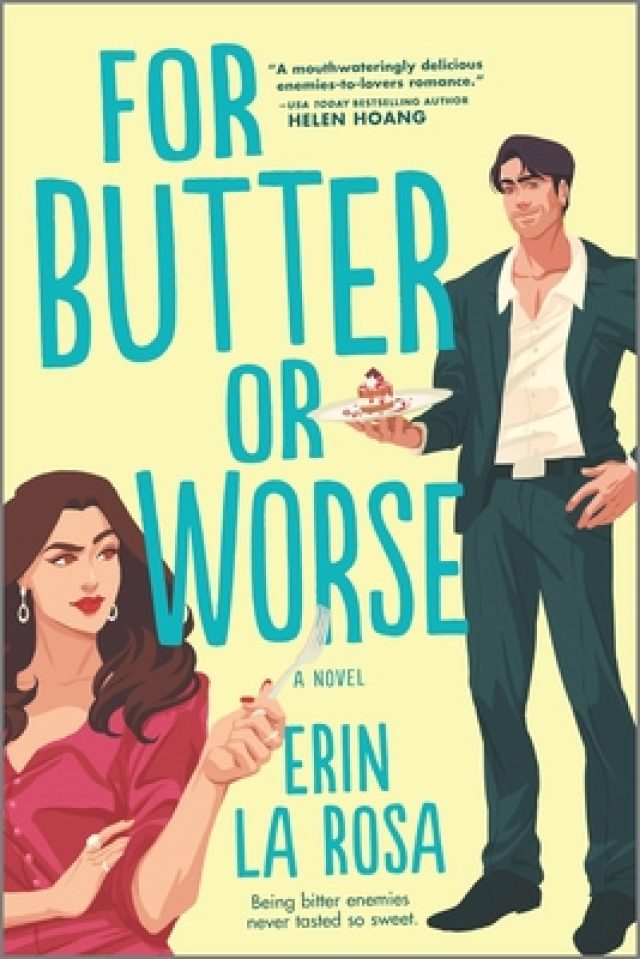 For Butter or Worse

All chef Nina Lyon wants is to make a name for herself in the culinary world and inspire young women everywhere to do the same. For too long, she’s been held back and underestimated by the male-dominated sphere of professional kitchens, and she's had enough. Now, as co-host of the competitive reality TV series The Next Cooking Champ!, she finally has a real shot at being top tier in the foodie scene. Too bad her co-host happens to be Hollywood’s smarmiest jerk.

Restaurateur Leo O’Donnell never means to get under Nina’s skin. It just seems to happen, especially when the cameras are rolling. It's part of the anxiety and stress he has come to know all too well in this line of work. So nothing prepares him for the fallout after he takes one joke a smidge too far and Nina up and quits—on live TV.

To make matters worse, the two are caught in what looks like a compromising situation by the paparazzi…and fans of the show go absolutely nuts. Turns out, a “secret romance” between Nina and Leo may just be what their careers need most. Now all they have to do is play along, without killing each other...and without catching feelings. Easy as artisanal shepherd's pie. Right? 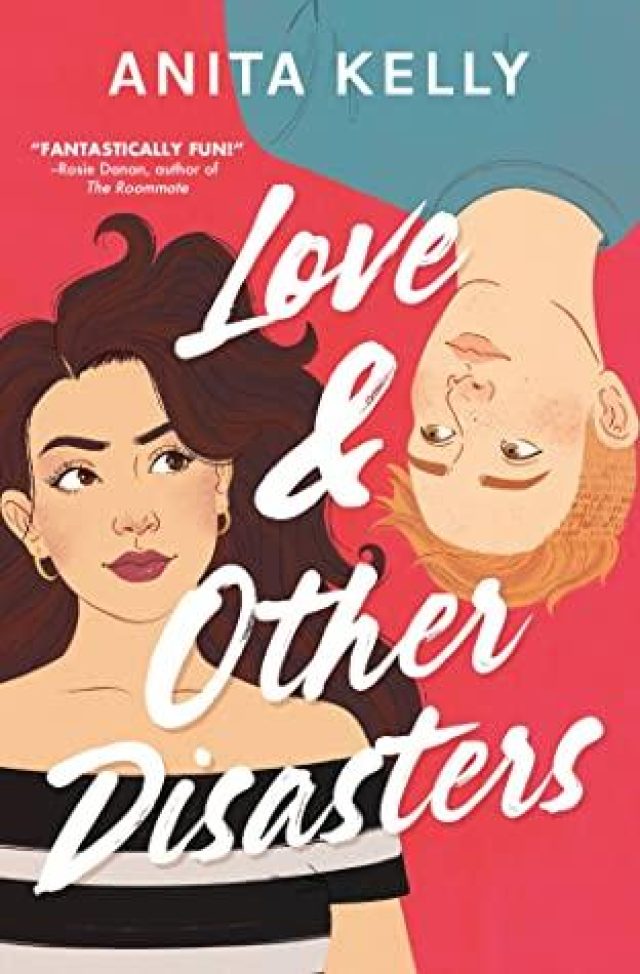 Love and Other Disasters

Recently divorced and on the verge of bankruptcy, Dahlia Woodson is ready to reinvent herself on the popular reality competition show Chef’s Special. Too bad the first memorable move she makes is falling flat on her face, sending fish tacos flying—not quite the fresh start she was hoping for. Still, she's focused on winning, until she meets someone she might want a future with more than she needs the prize money.

After announcing their pronouns on national television, London Parker has enough on their mind without worrying about the klutzy competitor stationed in front of them. They’re there to prove the trolls—including a fellow contestant and their dad—wrong, and falling in love was never part of the plan.

As London and Dahlia get closer, reality starts to fall away. Goodbye, guilt about divorce, anxiety about uncertain futures, and stress from transphobia. Hello, hilarious shenanigans on set, wedding crashing, and spontaneous dips into the Pacific. But as the finale draws near, Dahlia and London’s steamy relationship starts to feel the heat both in and outside the kitchen—and they must figure out if they have the right ingredients for a happily ever after. 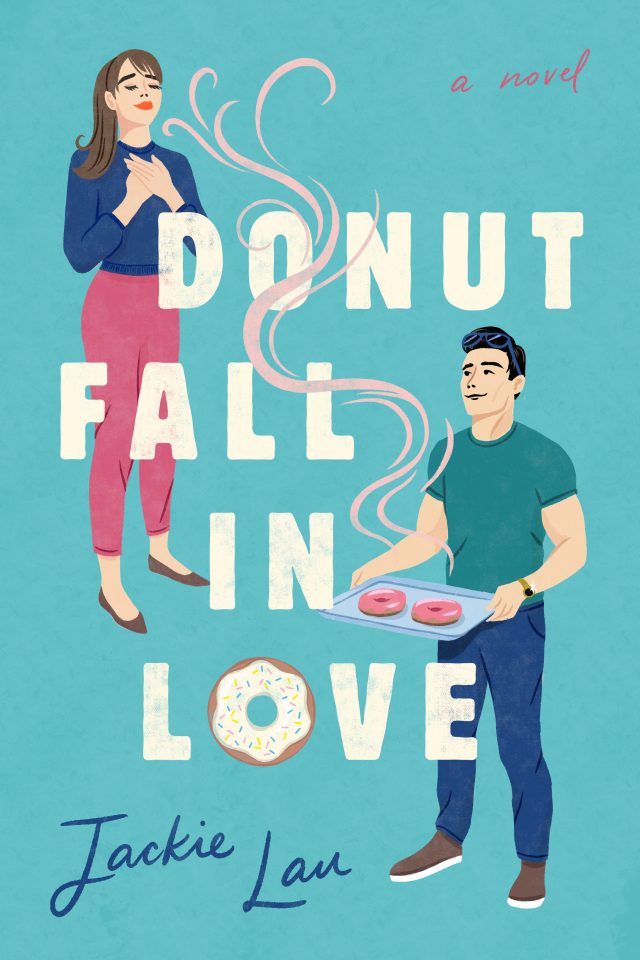 Actor Ryan Kwok is back in Toronto after the promotional tour for his latest film, a rom-com that is getting less-than-stellar reviews. After the sudden death of his mother and years of constant work, Ryan is taking some much-needed time off. But as he tries to be supportive to his family, he struggles with his loss and doesn't know how to talk to his dad—who now trolls him on Twitter instead of meeting him for dim sum.

Innovative baker Lindsay McLeod meets Ryan when he knocks over two dozen specialty donuts at her bakery. Their relationship is off to a messy start, but there’s no denying their immediate attraction. When Ryan signs up for a celebrity episode of Baking Fail, he asks Lindsay to teach him how to bake and she agrees.

As Lindsay and Ryan spend time together, bonding over grief and bubble tea, it starts to feel like they’re cooking up something sweeter than cupcakes in the kitchen. 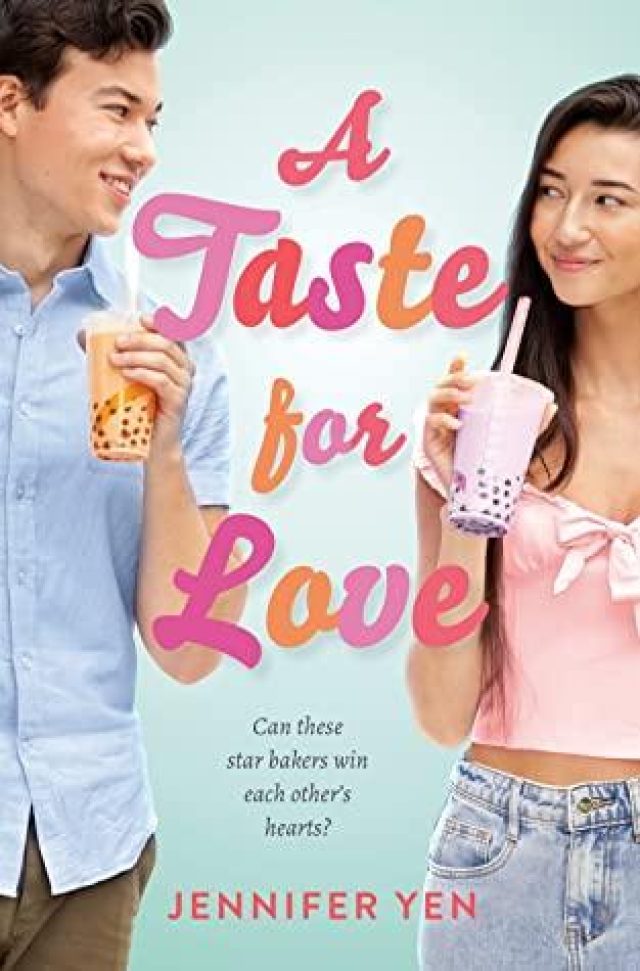 A Taste for Love

To her friends, high school senior Liza Yang is nearly perfect. Smart, kind, and pretty, she dreams big and never shies away from a challenge. But to her mom, Liza is anything but. Compared to her older sister Jeannie, Liza is stubborn, rebellious, and worst of all, determined to push back against all of Mrs. Yang's traditional values, especially when it comes to dating.

The one thing mother and daughter do agree on is their love of baking. Mrs. Yang is the owner of Houston's popular Yin & Yang Bakery. With college just around the corner, Liza agrees to help out at the bakery's annual junior competition to prove to her mom that she's more than her rebellious tendencies once and for all. But when Liza arrives on the first day of the bake-off, she realizes there's a catch: all of the contestants are young Asian American men her mother has handpicked for Liza to date.

The bachelorette situation Liza has found herself in is made even worse when she happens to be grudgingly attracted to one of the contestants; the stoic, impenetrable, annoyingly hot James Wong. As she battles against her feelings for James, and for her mother's approval, Liza begins to realize there's no tried and true recipe for love.