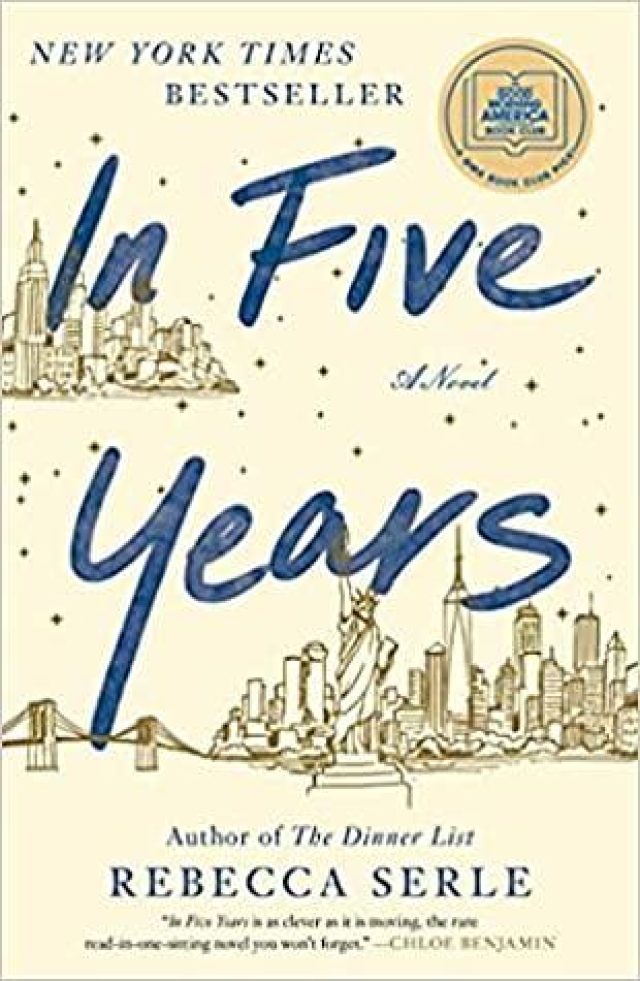 Dannie Kohan likes planning and organizing. She knows her goals and how/when to achieve them. When asked, at a job interview, where she sees herself in five years, Dannie answers with no hesitation. When her boyfriend (not so) unexpectedly proposes later that same evening after her interview, Dannie falls asleep knowing her life plans are on track.

But when Dannie wakes up, she's in a different apartment, with a different man. She glimpses a television report and realizes she's exactly five years in the future and her life doesn't look at all like how she imagined it would. After an intense, and let's face it life-altering, hour Dannie wakes up to her normal life.

The next four and a half years pass with Dannie's life plan still holding strong, but she can't seem to shake that dream. Was it a dream? Or some kind of premonition?

Dannie's perfectly planned life is further thrown when she meets the man from dreamontion (just made that word up) in the most unexpected way. And what precipitates will push Dannie's life off course, for the better? For the worse? You'll have to read to find out.

I fell headlong into this book. Once I started it was like a compulsion that I had to consume it as quickly as possible. As Rebecca Serle did with her wonderful The Dinner List, In Five Years is not as straight-forward as it's book blurb might make it sound. It was completely unexpected, but so thoughtfully written. The idea of Dannie dreaming about this other man, this other person that she's (possibly) supposed to be with in the future, is a great hook, but it's only a smidgen of what this story really deals with. Don't fret, it's still a love story fully and completely full of both joy and heartbreak (and I say this, have the tissues handy for sure).

In Five Years makes me delightfully happy yet also I feel like writing this review is incredibly difficult because I felt like my emotional journey with this story predisposes going in without knowing the full extent of what, as a reader, you're getting into.

Mainly, I love the idea - and it's something Rebecca Serle also played with in The Dinner List - about these inexplicable experiences happening. Are they real? A figment of imagination? Dreams? The ambiguity of what Dannie really experienced. It lends itself so well when discussing fate and love and "meant to be" scenarios. Does what Dannie saw influence her actions therefore bringing it to fruition, or is she actually seeing the future as it will play out?

Regardless, I loved how seemingly and unassumingly Rebecca Serle circles back to Dannie's dreamonition (see did it again!). How we eventually figure out how it meets or skews Dannie's (and reader's) expectations of the future.

In Five Years is another stark look at life and love that packs an emotional punch. 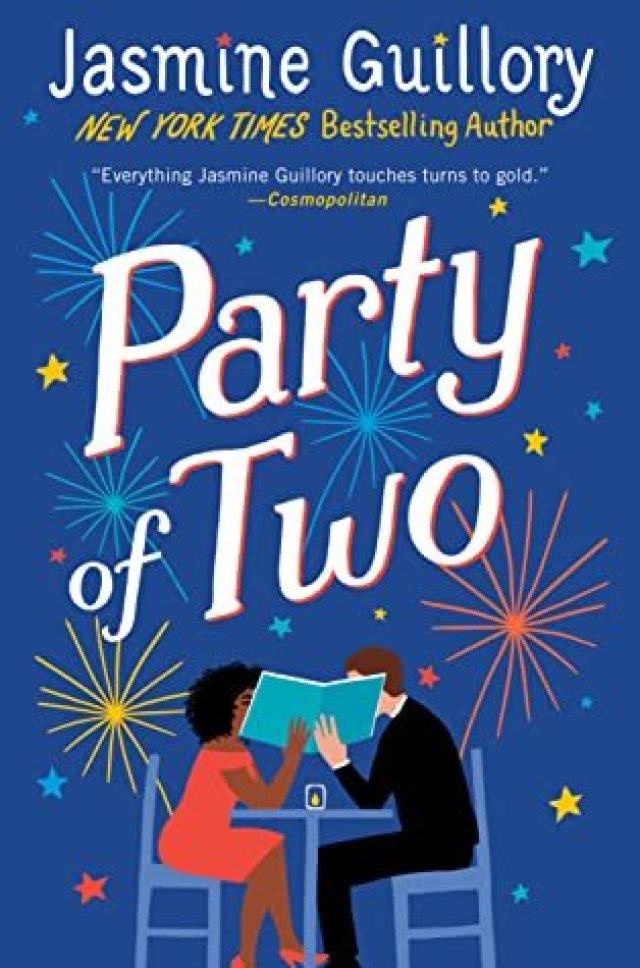 Moving cross country to start her own law firm, the last thing on Olivia Monroe's mind is getting into a relationship. But when she meets a guy at a bar and they spend an entire night flirting, Olivia decides she's certainly up for some fun. Then it turns out that the mysterious man is actually State Senator Max Powell and Olivia's idea of keeping things casual flies right out the window. But is Olivia ready for life in the spotlight next to a politician?

I've loved each of Jasmine Guillory's books since her debut with The Wedding Date, and I almost feel like Party of Two brings readers full circle as Olivia (Alexa's sister) now gets her own story. Although I'm far from ready to be done expanding the world Jasmine Guillory created just yet.

I really felt like the story itself, especially the dynamic between Max and Olivia was very timely. Max a white man born of privilege, and Olivia a black woman who has had to fight for every success in her career. I loved that Olivia is unapologetically proud of her success and the career she's built for herself without having to bow down to a man who came before. I think Jasmine Guillory does a great job of clearly drawing the lines between privilege and race and gender but instead of keeping the divide gives a hopeful look at how to lift up weaknesses with each other's strengths.

I think the biggest problem I faced with the story is that I felt like a never got a good bead on Max. It's pretty much because Olivia steals the show 100% which I'm perfectly fine with, but seeing as how this is a romance I wanted to feel more for him than I did. I didn't outright dislike his character, he seems like a genuinely nice guy, but there was something missing for me. I wasn't eager to get his perspectives like I was Olivia's. Maybe it's because over the course of the story Olivia is the one who has to go through the biggest change. Max has been a Senator for about two years, he's a little more seasoned in the media and public reactions - even at times seemingly aloof to the whole thing - whereas it's completely new territory for Olivia.

Regardless, Party of Two continues Jasmine Guillory's excellent record of entertaining reads with romance and heart. There were a few secondary characters that I'm hoping will get their own story. It's happened before so finger crossed!

Samiah Brooks was blindsided when she found out that her boyfriend was cheating on her. What was maybe more unexpected for Samiah is the friendship she forms with the other TWO women - Taylor and London. Together they decide to help each other work on themselves, their goals and their dreams sans looking for a boyfriend - hence The Boyfriend Project is born.

Samiah is on board with this until she meets Daniel Collins - a new hire at Trendsetters, the tech company where Samiah works. Daniel and Samiah immediately click and he has her wanting to throw The Boyfriend Project out the window, except she can't put her previous boyfriend's betrayal behind her. It's not the only circumstance in Samiah's life that keeps her from openly trusting. Should she put aside her past experiences? Or is Daniel Collins really a little too good to be true?

The first words I would use to describe The Boyfriend Project are Fresh and Refreshing. For me, it upped the romance game big time.

I was really impressed with how Farrah Rochon was able to balance all the varying aspects of the story. When I sit down and think about it, there are quite a few, which is why I'm so impressed that the author was able to give every aspect its due. I didn't feel like there was anything skimmed over or quickly brushed aside.

I know that many will view this as a romance first. And to be fair it is. I truly loved the build up of Samiah and Daniel's feelings for one another. It was paced and teased just right. It also lends itself well to the overarching conflict within the story which I won't talk about too much in order to keep a few things a surprise! But I will say that the conflict is expertly built and integrated throughout the story and I felt like it was handled in a way that didn't feel too rushed.

But there were a couple things about the book that overshadowed the romance for me - in a good way. One being the female friendships. This is probably the thing in the story I could have done with more of. As it stands I love seeing women empower each other instead of used as competition. Taylor and London and Samiah provide that support system for each other and I think their relationship is more important to the story than the romance. It's the touchstone for all that Samiah does. When she's hesitant about starting a new business venture, she talks things out with London and Taylor and gains much needed perspective. The same when she confides in them her feelings for Daniel. Without setting up these women, the story would have been very different. I would love to see more interactions between them, but I'm pretty positive that in setting this up as a series, there'll be plenty of time for that when Taylor and London inevitably get their own books.

The second thing that I thought was completely on point is Samiah herself. Specifically, Samiah knowing her worth, knowing what she brings to the table in regards to her job and her capabilities and not being afraid to acknowledge this and not being afraid to demand her worth. I loved that Samiah works in technology. I am not a tech person so I'm may bumble through describing things in this part so bear with me. I loved seeing a character being successful in her job, loving her job, knowing she is the BOSS when it comes to her job. So often I feel like we don't get to see these aspects because they can be used as another way to convey conflict or tension in the story for our main character. So instead of seeing someone own their capabilities readers are coming in at a point where they're slipping. Not here. Here we see Samiah thriving in her work even when things personally seem to be going downhill.

It's also encouraging to see women in IT. I know that it's a burgeoning field and I think that Farrah Rochon does a great job in making sure that readers know that computers and technology can be a girl thing too. She takes it a step further by talking about Samiah being a woman of color in a male dominated field. How much harder she has to work to be taken seriously and to get to where she's at today, but making sure that we know she is there because of her capabilities. Adding layers, relevancy, and a voice, but not making it seem like boxes are being checked.

This is the first book I've read by Farrah Rochon, but it won't be the last as I'm pretty excited where she plans to take Taylor and London's stories.